Sometimes you’re not in the mood to come up with a catchy title, y’know?

Backstory: I know virtually nothing about either side of my family. My parents are incredibly vague—my mother is Italian and a tad Irish, and my father insists that we’re English, as though a person could be purely one thing (what is he, a Slytherin?). But I’ve heard smatterings on both sides of, “Oh, so-and-so relative was French-Canadian,” or “So-and-so spoke fluent German,” and I have wild, thick, curly, frizzy hair that doesn’t seem characteristic of any of the above. I’ve met 6/8 of my great grandparents (they have all since passed away), but none of them ever mentioned a thing about their ancestors.

My paternal grandmother showed me her Ancestry.com DNA results last year, and ordered me my own kit for Christmas. I just got back the results, and putting together a family tree has been a total blast!

Unfortunately, I didn’t discover anything earth-shattering—I knew my Dad’s side had all come to America in the 1600s/1700s, but I figured my mom’s side would at least have a slightly cool history—no dice, Americans dating back well over a hundred years. But my makeup was not exactly what I was expecting. I am actually Italian (suck it, Dad), but everything else is a bit muddled. 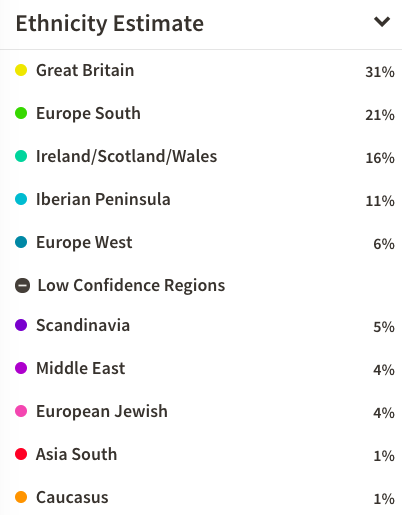 This list is what some might refer to as WHITE AS FUCK. But there’s definitely ambiguity! For instance, Northern Ireland, Scotland, and Wales are part of Great Britain, so I’m vaguely confused as to why they are separate categories. Am I just super, like, Welsh? (#catherinezetajones, #tomjones) Europe South refers specifically to Italy & Greece, and Iberian, obviously, Spain & Portugal. I never would have guessed I had any Spanish or Portuguese (according to the Ancestry summaries, apparently the Romans dickishly colonized the Iberian peninsula, so maybe that has something to do with it?) but 11% is a decently significant percentage! Higher than the German or French I’d heard about. These results explain the amount of blondes in my family (of course, I got mud-brown wire growing out of my head instead of my brother’s golden waves) and the crazy-high percentage of folks with blue or green eyes.

The “low-confidence” regions are also fascinating. I knew about the Asia South, Middle East, and Scandinavia (they showed up in my paternal grandmother’s results as well), but I was pleasantly surprised to see European Jewish! That’s got to be from my mom’s side, and I’m sure there’s a fascinating story there. I’ve always actually suspected that I might have some Jewish ancestry—I hope this isn’t inappropriate or fetishistic to say, but I’ve always felt very drawn to Jewish culture and traditions. Christianity (or Catholicism, my brand) never clicked for me. Watch it be a processing error.

The freakiest part of all of this is that, based on your DNA, you can track migrations over the past few hundred years and, insanely enough, it matches up exactly with my paternal family tree! From New England, my ancestors did actually end up in the Midwest and the West!

I went into an Ancestry.com free trial k-hole for hours and managed to figure out quite a bit about my family from public records (my dad’s side is way easier to pin down, since they’ve been Americans for 300 years—I’m basically, like, Cotton Mather). Since I only have one side that has any ostensible “ethnicity,” it bums me out that the language hasn’t carried over generationally. I know probably the most Italian out of everyone in my family and I only took Italian I in high school!

Now all I need is to get famous enough for Henry Louis Gates Jr. to research my ancestry and tell me about all the crazy shit my family did 150 years ago. From the research I’ve been able to accomplish, I’m likely not descended of slaveowners which is honestly a bit of a relief—that’s always a tough pill to swallow on Finding Your Roots. I mean, I’m sure my family were a bunch of white devils but at least I don’t have to live with crimes against humanity on my conscience.

This whole experience has me yearning to know more. I’ve always been a history nerd (with the amount of time I spent reading historical fiction in my youth, it’s amazing I ever got a high school boyfriend), and I’m a Leo, so it’s fun to finally insert MYSELF into the narrative. I’m still as American as prohibitively expensive healthcare and morbid obesity (dark?) but at least I have a clearer sense of where I big-picture “come from.”