So, full disclosure, I’m actually not much of an animal person. I never had pets growing up, and I was afraid of dogs and freaked out by cats into my twenties. However, when I was 21, I made a friend named Michael, who had a 6-year-old kitty named Della. She’s 13 now, and I’ve gotten to spend over 6 glorious years with her, which I have cherished, even though she’s an asshole. I have grown increasingly fond of cats over the past half-decade, and while I still don’t touch the litter box or feed her (those are Michael’s jobs), I spoil her with affection and sacrifice all of my nice furniture to her hair and claws. If you know anything about me, it’s that I really value the aesthetic of my home, so having ugly pet supplies is not an option (if I ever have a kid, the poor thing’s going to be playing with wooden blocks, because I’m not letting plastic Fisher-Price stuff into my house).

I’m always on the lookout for ways to upgrade my space, and that space includes an animal for the foreseeable future.

I am in denial about the concept of litter boxes. Why? Why does this animal have to eliminate waste inside of my house? Can’t they breed a type of cat that doesn’t do this? It’s frankly vile, but at least it’s less vile than TOUCHING a dog’s POOP with your HANDS when you walk them (Seriously? Why would anyone ever get a dog?)

If this hideous monstrosity needs to be within the walls of my domicile, I’d at least like it to be nice-looking. 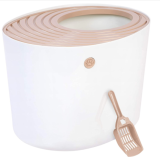 If the existence of litter boxes wasn’t disgusting enough, cat spill little pebbles of litter when they come out of the box, so you have to put down a mat to catch it (and any other surprises that might leak out (vomit face emoji). We have the second one, which I use as an extra mat at the edge of the existing mat underneath her box. 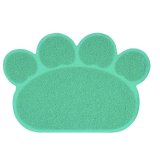 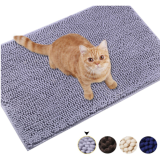 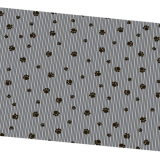 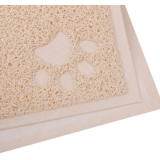 I mentioned before that Della is an asshole, right? She has two beds, and still chooses to sleep on my furniture (she has a predilection for slipper chairs). Since she doesn’t use her beds, I have no grounds upon which to get her another one, but that won’t stop me from browsing. 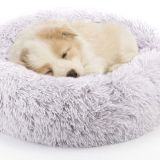 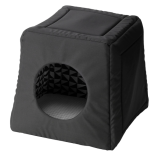 Michael and I often marvel that there’s a small, wild creature living with us. She has a very strong personality and is extremely opinionated. Gender is a construct, but my cat…is a girl. I can’t explain it, but she exudes a very feminine energy. I think she’s going stir-crazy with us being home all the time, but she still snuggles under the covers with us at night, so she must like us a little bit. I think, in quarantine, we can all learn a lot from indoor cats: take frequent naps, get as cozy as possible, and learn to relax.